A scholar's early encounter with Menzies 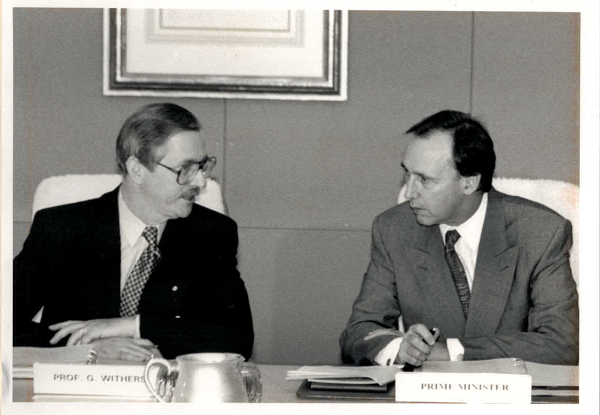 Glenn Withers is a Distinguished Professor of Economics at the Australian National University and University of New South Wales and was founding CEO of Universities Australia. He was awarded his RG Menzies Scholarship to complete a PhD in Business Economics within the Graduate School of Arts and Sciences at Harvard University in 1970, well before the Menzies Foundation was even contemplated.

Glenn's extensive career achievements include helping to establish the Productivity Commission, the Crawford School, ANZSOG and Universities Australia. He has recently been appointed Global Board Chair for the Wold Bank's Global Development Learning Network.

As one of the earliest RG Menzies Scholars to Harvard, Glenn was fortunate to have one-on-one meetings with Sir Robert Menzies and recently shared what he had gleaned about the man and his leadership during those sessions in Sir Robert's Melbourne office.

Tell us about your job?
One of the most appealing aspects of being an academic is that the job can continue as long as your mind so chooses. Having retired as founding CEO of Universities Australia, I am now enjoying being an itinerant honorary professor at ANU, UNSW and also Tongji University in Shanghai.

What are the biggest challenges in your career right now?
The biggest challenge is finding the time to engage all the interesting challenges. A further honorary job currently is President of the Academy of the Social Sciences in Australia and another is Chair of the Global Development Learning Network of the World Bank. Both could consume an infinity of time, such are the challenges and the rewards from engaging them. Both provide splendid opportunities to advance the role of knowledge in human affairs.

What is the most fulfilling aspect of your work?
Choosing to work on what interests me is very fulfilling. This includes developing structured understanding of challenges and contributing to improvement through that understanding. For me, this has facilitated not only work in academe, including with a pride of vice-chancellors, but time working to prime ministers, captains of industry and labour and community bodies, and interrogating how they operate with what effect. Understanding this is very fulfilling.

One conclusion I have reached is the importance of institutions in advancing progress. I have derived great satisfaction from being involved in such efforts as establishing the Productivity Commission, the Crawford School of Public Policy at ANU, the Australia and New Zealand School of Government, and Universities Australia - all vehicles for knowledge transmission. Overseas I have even helped establish the Royal University of Bhutan (and likewise built a Human Resource Development Masterplan for Malaysia). It is good to escape from Australia sometimes.

Who has influenced your career and how?
My economics teacher (later Principal) at Melbourne Boys High, Neville Drohan, put me on to the road of economics. I will never forgive him! But perhaps I will really because that road gained me a Menzies Scholarship that took me to Harvard Economics. From that base I was given free rein in broadening out through taking courses in the Business School, Law School, Kennedy School and the Graduate School of Arts and Science, as well as ending up teaching there. It was an intellectual feast and as a result I have been an omnivorous academic working also in business, government and the community.

Even while studying for the PhD I worked from a distance with the Working Women's Centre of the ACTU to help develop the case for the equal pay decisions of that era, proving equal pay would not cost jobs. We were proven right.

Which book has influenced you the most?
Probably two books actually: J K Galbraith's The Affluent Society and John Rawls' Theory of Justice. I tutored for Galbraith at Harvard and attended Rawls' classes. Their ideas took me beyond the technical core of my economics into questions of society and justice. Between them they encouraged a book I wrote on Conscription that was an effort at a multi-disciplinary analysis: history, economics, political science, and ethics.

The book was published in 1972 in Australia and sold like wild-fire for six months before Gough Whitlam was elected and abolished conscription as his first act of government. The book was then remaindered. However this intellectual journey also took me to advising the Australian Government on the implementation of this decision and the US Government on ending the draft, hence it was a great introduction to engagement.

Likewise Galbraith also took me to the world of economics and the arts, the theme of one of his courses. I ended up writing a book with David Throsby on this - and it lead to many a rewarding arts engagement as chair of arts companies and festivals. From there broadcasting analysis was a small step, and this led to working with fascinating individuals such as Dr Nugget Coombs, Kerry Stokes and Brian Johns of the ABC.

Name one thing about Sir Robert Menzies every Australian should know?
When I was awarded one of the early Harvard Menzies Scholarships, one treat as a Melburnian was getting to meet and know Sir Robert himself. We had private one-on-one meetings in his office in the city and he expanded on his views. One important insight was that Menzies was much more than the Anglophone conservative he is often depicted to be. For instance, he was inordinately proud of his role in the enhancement of Australia's relations with Asia, such as the Colombo Plan. Discussions with him on this theme led me to a lifelong interest in immigration, and the great satisfaction that comes from my later helping to develop the modern Australian immigration system (the "points system").

Incidentally, Menzies also was immensely proud of his support for the ANU in Canberra, an achievement that I can with the benefit of hindsight personally endorse as very worthy indeed.

How do you describe leadership?
Leadership is the ability to take people with you in pursuit of a vision. It is a more far-sighted capability than management, which co-ordinates well the existing ways to make things work or even improve incrementally, and it is streets ahead of administration which implements the tasks given by management. If anything, its closest analogue is entrepreneurship, which breaks new ground but, sometimes, comes up short on delivery.

Who is the best leader you know?
Sir Robert Menzies comes pretty close through his ability to balance 'continuity and change' for sixteen years continuously as Australian Prime Minister in the post-war era. Equally, having closely observed Bob Hawke and Paul Keating during the years of micro-economic reform I can be quite bi-partisan in admiring leadership where it does occur. The Hawke adoption of consensus politics and Keating's provision of a "big picture" for the future, combined to transform modern Australia's capacity for progress.

For full details of Glenn Withers' wide-ranging influence, you can take a look at his bio here.