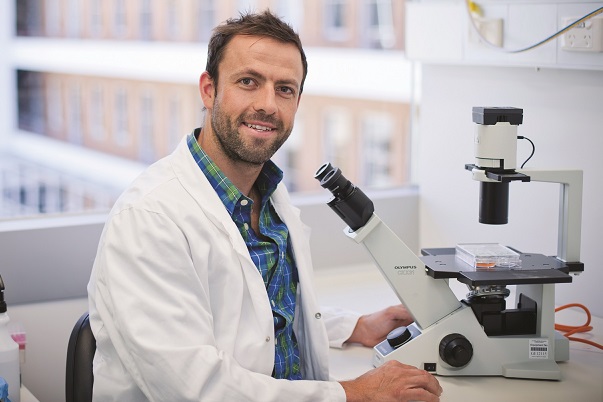 NHMRC/RG Menzies Fellow and Walter and Eliza Hall Institute (WEHI) laboratory head, Dr Nick Huntington, has been awarded the Burnet Prize to top off an outstanding year for the early career researcher.

The prize was for his research and discoveries in innate immunity and immunotherapy.

Earlier in the year Nick's team - the Huntington Lab in WEHI's division of Molecular Immunology – made discoveries about the mechanism by which natural killer (NK) cells destroy cancer cells, which received international coverage and added to his growing reputation as an NK cell expert.

These cells occur naturally in the body and the Huntington Lab is looking for ways to activate them so they can fight an individual's own cancer cells more efficiently.

The team was also a finalist in the UNSW Eureka Prize for Scientific Research for their work in targeting innate lymphoid cells for immunotherapy and protection against infections.

In awarding the Burnet Prize, Director of WEHI, Professor Doug Hilton AO, a former winner of the prize, said: "The results of studies driven by Nick have provided scientists with a new way of approaching drug targets and the development of cancer treatments".

But it's always the science that comes ahead of the accolades and the discovery of NK cell checkpoints provided a particular thrill.

It's not only been the professional accolades that have come his way this year, but Nick and his wife Patricia also welcomed their first baby earlier in the year, a girl named Alison, making 2016 a pretty special year all round.

The Burnet Prize is awarded annually by WEHI and recognises early career scientists for their pioneering research. The prize was established in 1987 through a bequest of Sir Frank Macfarlane Burnet. The prize includes $2,000 and an engraved bronze plaque by Melbourne sculptor Michael Meszaros, who also designed the Menzies Scholarship medallions.