Dimboola student comes out a winner 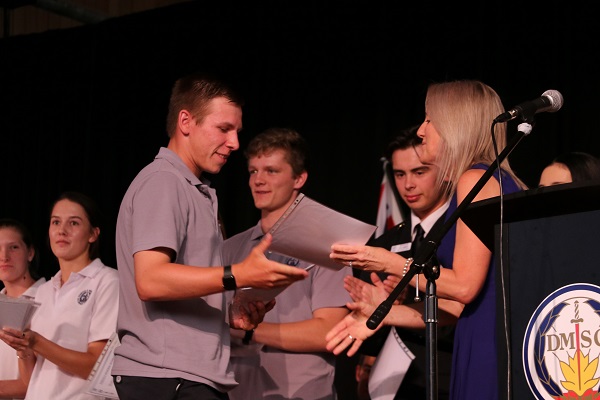 Each year the Menzies Foundation awards the $10,000 prize to an exceptional graduate from DMSC, a small school in country Victoria, to contribute to the cost of their first and second years of tertiary study.

For Sam, going to university will mean moving out of home and living on campus. “The Menzies Centenary Prize will help to relieve the financial burden of going to uni, which I’m really thankful for,” he said.

Although selection is based mainly on academic achievement, the Menzies Centenary Prize recipient also needs to demonstrate notable contribution to the life of the College. Sam stood out on both counts.

Graduating year 12 as dux of the College, he attained the highest ATAR any DMSC student has ever achieved with a score of 99.25. The academic star also showed wholehearted enthusiasm for College activities, especially sporting events. Throughout his school years he never missed an athletics carnival, school swimming day or cross country event, and was regarded as an excellent role model for his peers. He was also active in the local community, helping out at BBQs and with odd jobs, and providing training in junior sport.

Having deferred his university studies this year, Sam has been working at DMSC in a volunteer capacity, assisting in senior maths classes. His dedication to the College’s sporting events remains strong, and he continues to support the school’s sports days.

Sam’s love for sport has prompted a change in his plans for the future. “Until recently I wanted to be a maths teacher,” he said. “I’ve now realised physiotherapy is a better fit because of its links to sport, so I’m now planning to study physiotherapy at La Trobe University in Bendigo.”

The Menzies Centenary Prize was established by the Menzies Foundation in 1994, in partnership with the Dimboola Memorial Secondary College, to mark the centenary of Sir Robert Menzies's birth in Jeparit. It is funded by the Foundation and its scholars.

As it was for Sir Robert, Sam expects sport will be a big part of his university life. “Sport is very important to me, and I definitely plan to get involved in various teams at uni.”

Sam hopes his time at university is as rewarding as his time at DMSC. “I’m grateful to my teachers and classmates at DMSC for making school so enjoyable, and to my family for their support while I was studying.

“I’m also very grateful to the Menzies Foundation for this incredible award. Sir Robert was a remarkable man, and I’m honoured to receive a prize in his name – it’s really special.”