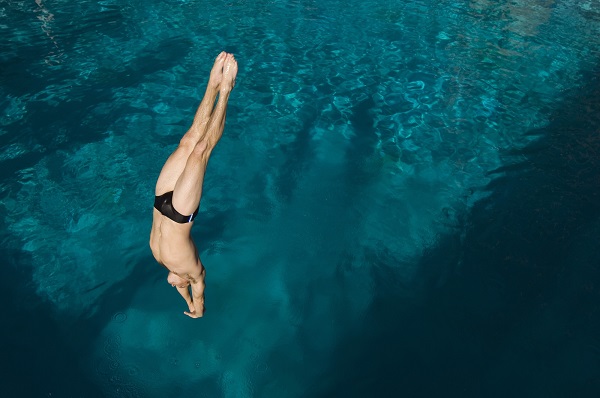 Two-time Australian Olympic Diver and Harvard Menzies Scholar, Mike Murphy, says the transition from Olympian to the next phase of life presents significant challenges for many athletes.

But 20 years on from his last Olympic appearance, the message he'd like to give them is pretty clear: there is so much more to life.

It's a leadership role he clearly enjoys, set up with qualifications in commerce and law at Bond University, experience as a consultant with Bain & Co and his time at Harvard completing an MBA.

"My wife (Pip) and I were both finalists for the Harvard Menzies Scholarship. We were engaged at that time and before we went over to Boston we got married. I went to do my MBA and she went to the Kennedy School of Government. So it was a nice time of life to be in Boston as newlyweds, pre-kids (they now have three children) and also excited by learning.

"At Harvard they describe it as a transformational experience and it really is ... there is no better way to test ideas and theories than by standing up in front of 90 of your best friends and using the case studies and debating culture to learn.

"You are exposed to the best of the best students and the Harvard network is very powerful, especially here in Australia."

As a self-confessed diving nerd, Mike has always maintained a close involvement with his first love and his now the Chair of the Board of Diving Australia.

It's a long way from the school holiday camp in 1983 at age nine, were he tried trampolining for the first time, setting up a meteoric rise to the top of Australian diving.

Mike found out he had a talent for diving entirely by chance. It is somewhat of an understatement when he says he "discovered a natural acrobatic talent". In fact by 10 he was the World Junior Champion for his age in trampolining. In 1984 trampolining was not part of the Olympics, but astute diving coaches knew talent when they saw it and also knew they had the drawcard of Olympic possibilities on the horizon. One local diving coach put the switch to Mike's parents and the rest is history.

At 11 Mike made the transition to diving and just three years later barely missed qualifying for the Seoul Olympics. The profound disappointment in missing out may have been a blessing in disguise, Mike says now, and having been national champion in springboard diving for three years, comfortably qualified for Barcelona in 1992 as a seasoned 18 year old competitor.

"Barcelona was a magical Olympics. I was just emerging on the world stage so the expectations were low and my aim going in was to get into the final; the top 12.

"When I came fourth I was absolutely thrilled. A lot of people might think fourth is disappointing because you just missed out on the medals but for me it was a great result. It was the best result for an Australian male since 1924 so that puts it in perspective."

Mike went on to dive for Australia again at the Atlanta Olympics in 1996 before succumbing to a back injury in 1997.

"A topic I'm really interested in is an athlete's transition into the next phase of life. People refer to you and you even think of yourself as an 'Olympic Athlete'; up until the point you decide to stop, that's your identity. And often that's not at a time of your choosing - very few athletes get the fairy-tale ending," Mike said.

"I didn't go out the way I would have liked at Sydney in 2000, instead a back injury just became too painful to manage.

"I was lucky because I got a full scholarship to Law and Commerce at Bond University straight away, so it gave me something new and challenging to focus on immediately.

After he finished competing, Mike went on to be national selector from 2000-2004 and then joined the national board of Diving Australia.

"I've probably had as many or more challenges in leadership being part of a sports board than in my professional life," Mike said.

"In sport people get very, very passionate and you are resource-constrained, both in the number of people and the dollars which have to stretch a long way.

"My responsibility and contribution as the chair involves close relationship with our CEO, who does a great job, working on the governance and the strategic direction and working with our stakeholders.

"It's all about the athletes and they are our most important stakeholders but we're also very conscious that the Sports Commission is our primary funder and therefore we're accountable to government for results and the way the money is spent. We also maintain relationships with the coaches, parents, state institutes.

"I'm the first Diving Australia Chair for 20 years who is an ex-athlete and I think that helps bring a good perspective; we have a good mix on the Board.

"We deal with athletes who very much feel that their sport and their Olympic ambitions are everything, and often find it hard to visualise a life beyond sport. It helps to have been in their position. Most athletes don't finish on their own terms and that's very hard.

"Recently I spoke to an injured athlete who had to withdraw from Rio and that was devastating for her, but I was able to give her a bit of advice and perspective from 20 years further on that in life there is so much more".