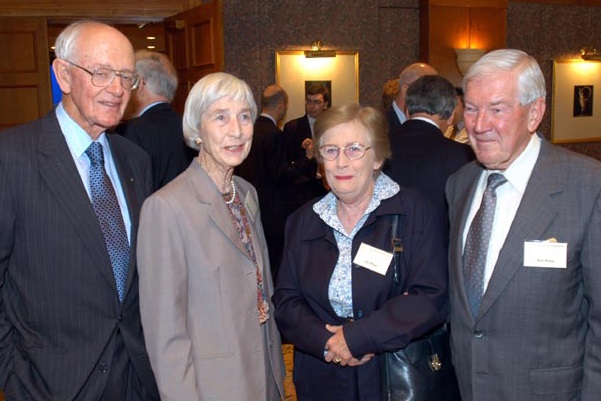 One of the founding Directors of the original Sir Robert Menzies Memorial Trust, Robert White AO, has passed away peacefully aged 93.

Bob White, as he was better known, was also the Deputy Chair of the Menzies Foundation when Sir Ninian Stephen was Chair in the late 90s.

Mr White was the honorary Treasurer for the Trust and the National Appeal Committee, which ran the initial public fundraising campaign to fund and establish the Menzies Foundation.

During a distinguished career, Mr White became the CEO of Westpac and was highly regarded in business, also serving on numerous corporate and professional association boards.

Mr White retained an interest and an association with the Foundation throughout his life and was a strong supporter of its work. He is pictured at the Foundation's 25th anniversary celebrations in 2003 (right) with his wife, Jan, and Peter and Heather Henderson. Peter also recently passed away while Heather, Sir Robert Menzies' daughter, is living in Canberra.

"Bob played such an important role in setting up the Menzies Foundation and ensuring it had the right financial and strategic footing.

"We owe a great thanks to the Founding Directors and we keep their legacy front of mind as we work on shaping the next priorities for the Menzies Foundation."

Bob White's funeral will be held at the Uniting Church in Deniliquin at 11am on Monday 24 July, for family, local charities he assisted, and residents of Deniliquin and surrounding areas. Others are welcome to attend.

A larger Memorial Service will be held at St Stephen's Uniting Church in Macquarie Street, Sydney on Thursday 10 August, starting at 10.30am. Refreshments will follow at the State Library.