Improving support for refugees and the countries that host them 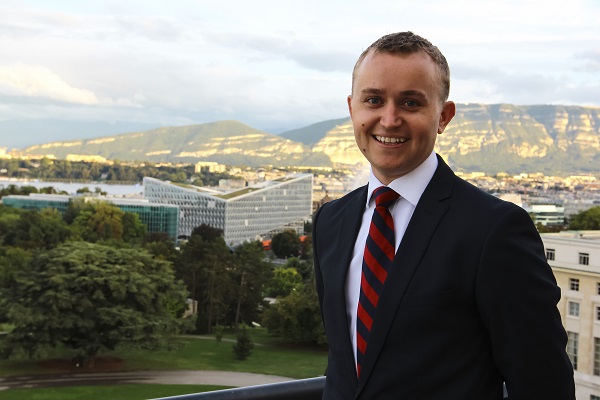 Working on one of the world's most intractable issues - how to improve the global response to historic levels of refugee displacement - has become a daily pursuit for Menzies Scholar, Patrick Wall.

As part of last year's New York Declaration for Refugees and Migrants, the United Nations General Assembly asked the High Commissioner for Refugees to propose in 2018 the text of a global compact on refugees, which is to be an international agreement aimed at improving the way in which the international community responds to large movements of refugees.

Patrick is a member of UNHCR's Task Team on Comprehensive Responses and also the Office of the Assistant High Commissioner for Protection. He says the key aims of the compact will be to provide better support to refugees themselves, but also to the countries and communities that host large numbers of them.

Just to give a sense of the enormity of the challenge, UNHCR announced last year that the number of people driven from their homes as a result of conflict, persecution and violence had passed the threshold of 60 million for the first time since records began. A recent report also found that the majority of the 3.2 million people displaced in the first half of 2016 found shelter in low or middle-income countries.

The High Commissioner for Refugees, Filippo Grandi, said on his appointment last year that "UNHCR is navigating extraordinarily difficult waters. The combination of multiple conflicts and resulting mass displacement, fresh challenges to asylum, the funding gap between humanitarian needs and resources, and growing xenophobia is very dangerous."

But out of this challenge comes what Patrick and others at UNHCR, including Assistant High Commissioner for Protection, Volker Türk, believe is a once-in-a-lifetime opportunity to improve the lives of millions of people who have fled persecution and to support the communities that host them.

"The huge flows of people into Europe in 2015 drew the world's attention to the fact that we need to do a much better job of protecting people who are forced to flee their homes," Patrick said, "though of course many people have been saying this for a long time and some countries have been hosting enormous numbers of refugees for decades.

"Partly as a consequence of recent events, however, the international community has focused – possibly briefly – on the need to improve the way in which it responds to large movements of refugees, and this means that we have a chance to make real progress."

In developing the global compact, the focus now is on wide-ranging consultation, generating ideas and proposals, drafting the compact itself, and developing strategies to maximise the chances of the compact being adopted by the General Assembly. "I am very lucky to be in the position where I have a small role in quite a lot of this work," Patrick says. "There is lots to do and plenty of pressure to get a good result, but there are some very motivated and talented people from all across UNHCR and beyond who are contributing their considerable skill and experience."

"My studies in Geneva have been enormously useful. The classes I took at the Graduate Institute on topics including international human rights law, humanitarian action, and the relationship between international law and international politics gave me a solid base of understanding that I am now using – and trying to build on – at UNHCR.

"In fact, the way I got my foot in the door at UNHCR was through a paper I wrote for a course I took at the Graduate Institute that addressed some of the issues that I am now working on."

The paper will shortly be published in the International Journal of Refugee Law.

The UNHCR role is Patrick's second since finalising his studies in Geneva. He previously worked as a consultant for the Intergovernmental Consultations on Migration, Asylum and Refugees, also known as IGC.

The 30-year-old organisation – which is a forum of participating states (12 from Western Europe plus Australia, New Zealand, the United States and Canada) and participating organisations (UNHCR, the International Organization for Migration and the European Commission) – hosts open and frank discussions about migration, asylum and refugee policy.

A small organisation, IGC started looking at migration and refugee issues well before they had the intense global focus they do now. As other large institutions, most notably the European Union, have turned their attention and considerable resources on these issues, Patrick says that IGC has had to adapt.

"It has been interesting to have moved from a very small to a relatively large organization looking at many of the same issues," Patrick says. "UNHCR is a global agency that has staff around the world and speaks with great authority, but being small has its advantages, too. So long as they are flexible enough to be able to fill gaps between the work done by others and humble enough to alter priorities when overlaps appear, small organizations can be very agile and much more effective than their size would suggest."

From the very large to the very small, Patrick is getting a taste of being right in the thick of it, with some important lessons for organisations in Australia and abroad.

The Sir Ninian Stephen Menzies Scholarship in International Law will reopen for applications in 2018.