Indigenous Mentoring Fellow plans to be a game changer 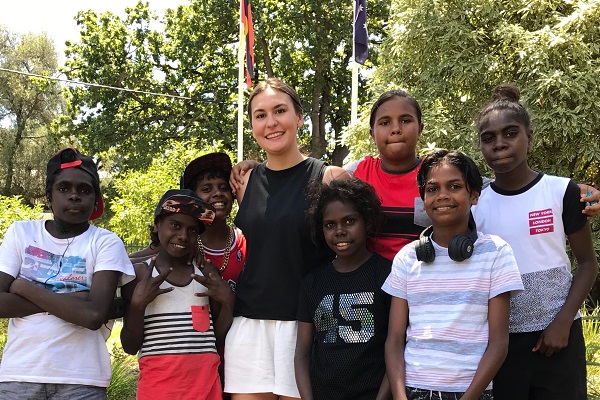 The first Sir Robert Menzies Indigenous Mentoring Fellow, Michelle Kerrin, knows it's a big deal to have an Aboriginal cultural background because for much of her life it was the missing piece of the puzzle.

The Darwin-born, University of Melbourne student and proud Arrernte and Luritja woman, has started her role as the Mentoring Fellow to the students at the Melbourne Indigenous Transition School (MITS) with a very important message: we can be the teachers about our culture, we can be game changers.

Michelle, who lived all of her life in Darwin before coming to Melbourne for university in 2015, will take on two important mentoring roles in 2017, both of which have been designed to help make the transition to study and higher education smoother for indigenous students.

Her own experiences should prove invaluable for those who follow her.

"First year at uni was really hard - I made the big leap; I had no friends and no family in Melbourne and there really were moments when I wanted to drop out. But I had mum there on the other end of the phone really encouraging me and saying 'keep going a bit longer and see how you go.'

"Being away from family is really hard - you are just used to them being there all the time. I'd been to Melbourne on holidays and it was my dream to come here to uni so I was happy to take the step, but it's so different. Darwin is so laid back, where Melbourne is fast moving and you have to keep up; stay in the moment.

"Second year I found my passion at uni and now it's so much easier."

Michelle, who is going into third year of a Bachelor of Arts in Indigenous Studies, will be able to share her experience and hone her mentoring skills at MITS in Richmond, when she starts working with 22 Year 7 students who have come from all around Australia to make the transition from living with family in remote and regional communities to high school in Melbourne.

The school was established last year to implement a new model of education and give indigenous students with high potential the opportunity to take up scholarships at Melbourne partner schools, after one year of transition and support through Year 7. MITS and the Menzies Foundation have partnered to create the Menzies Mentoring Fellowship as part of the model to empower students to succeed in high school.

The Menzies Foundation has extended its long-term commitment to young leaders and improving outcomes for Indigenous people, to support the new fellowship, which will go to one young Indigenous leader, enabling them to provide essential mentoring, peer support, and cultural connection to MITS students on a regular basis throughout the school year, whilst undertaking their own study.

"I think the thing I can share with them will be that it is ok to go looking for extra support. There are people to connect with. There are other ways to feel that comfort (of family)," Michelle said.

"I want to create opportunities for young Indigenous people to feel safe and comfortable.

"I want to show them the importance of culture. Basically I haven't had so much of it growing up (having come to it more recently), so I see how important it is now that I have that connection with my father's family. Even though I might not see them very often, it's just important to know they are there and I can find them when I need to," Michelle said.

Michelle's Aboriginal father became ill very shortly after she was born, eventually passing away when she was just eight. At that time she essentially lost contact with his side of the family and culture, something she is making up for now, with a drive to connect and stay connected to the crucial part of who she is.

Somewhat ironically it was when Michelle moved to Melbourne, so far away from family and friends, she felt a yearning to better understand her cultural heritage.

"I had a real drive to connect; to be able to introduce myself and tell people who my mob were. I started to understand why it was a big deal to have this kind of cultural background.

"I think people do want to understand and know more about Indigenous cultures and our mobs and we can be the teachers. We don't have to wait to be asked to tell other people about culture and what it means to us."

Michelle is the beneficiary of The Ann Miller Indigenous Scholarship students attending University College at the University of Melbourne and she is pretty keen to share her learning and good fortune with others.

"I definitely know I've been given a lot of privileges. I've been able to develop a relationship with Ann Miller (who funded the scholarship) and I understand it is a big deal. I want other Indigenous students to understand and know this support is available."

In this vein, in 2017, as well as a Menzies Fellow at MITS, Michelle will be part of the Indigenous Ambassadors and Mentors Program at Murrup Barak at the University of Melbourne, assigned to work with a first year student; to attend the open day, involve them in the weekly on-campus lunches for Indigenous students and give them someone to talk to through that challenging first year. This will be the first year this model will be in place at the University of Melbourne.

The other things that help Michelle connect with young people and feel part of something broader, are her passions for sport and music.

An outstanding netballer, Michelle held a Northern Territory (NT) Institute of Sport scholarship from 2012-2013 and was Captain and Vice-captain of the NT team in the Australian Netball League in 2014. She also represented the NT in hockey in the under 16s. A love of sport is something she shared with her mum - also a good sportswoman - and kept her focused in laid back Darwin.

Now in Melbourne, Michelle plays and coaches at Doncaster. "They are like another family to me and that's what I looked for when I was looking for a club."

With a plan to take on a role with young people after university, Michelle's interests in sport and music help in breaking down a few barriers.

Michelle studied piano and music throughout high school, but now it is more of a hobby and she'll play when she sees a piano. But she certainly sees the value of the connection music can make for young people. "When I was coaching the young girls, I found that talking about music was a way to connect and get them listening.... So I just kept talking!"

And it is likely people will keep listening to Michelle as she takes on her new mentoring roles.

"It is my goal to provide Indigenous children with the right support system that ensures they remain connected to their culture and country whilst receiving an education. I want to show and prove to people that we are strong Indigenous game changers, to show that we can achieve anything."