Making a contribution to Australian science 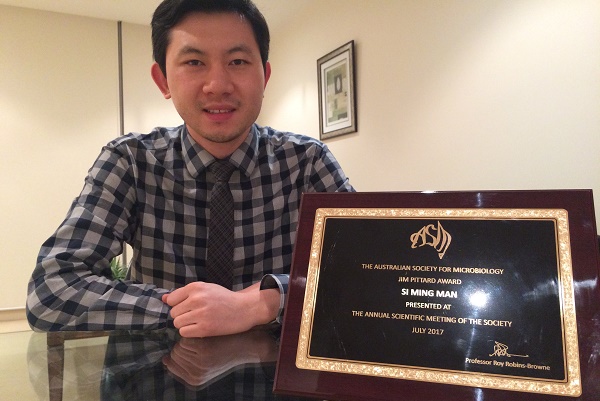 2014 NHMRC/Menzies Fellow in Medicine, Dr Si Ming Man, has been presented the Jim Pittard Early Career Award from the Australian Society for Microbiology (ASM) for his growing body of research work.

The award recognises distinguished contributions in any area of Australian research in microbiology by scientists in early stages of their career. Si Ming collected the award in Hobart this month at the ASM Annual Scientific Meeting and delivered the Jim Pittard Lecture, on the topic 'Pathogens, pattern-recognition receptors and innate immunity'.

Si Ming has taken up a role at the ANU this year, as Group Leader in the Department of Immunology and Infectious Disease at the John Curtin School of Medical Research.

Fresh from his two year stint at St Jude Children's Research Hospital in Memphis, Tennessee, Si Ming says he's very happy to be back in Australia and keen to make more contributions to Australian science.

Si Ming was presented with the Milstein Young Investigator Award for 2016 in the United States last year.

Professor Jim Pittard was a renowned microbial geneticist and molecular biologist from Victoria. He was made professor emeritus at the University of Melbourne upon his retirement in 1998.