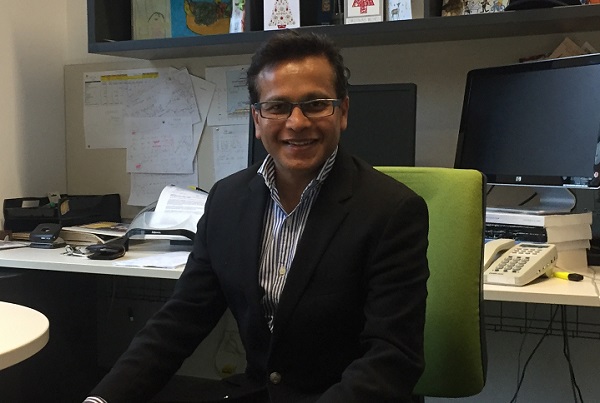 Professor John Pimanda, haematologist and 2003 NHMRC/RG Menzies Fellow, has been appointed head of pathology at UNSW, expanding his role which already straddles clinical and academic roles.

In addition to his new role, John, is head of the Adult Cancer Program at the Lowy Cancer Research Centre, UNSW and a haematologist at the Prince of Wales Hospital.

But when you talk to John about his work, it's clear his research work is his first passion and it's the opportunity to make transformational change which drives him.

"Circumstances determine a lot of things; who you meet along the way, who influences you... when I was training as a haematologist, the people who had a spark and attracted me were the researchers," John said.

"People like Colin Chesterman from the Prince of Wales and Phil Hogg at UNSW were early and defining mentors.

"In research you are inspired by conversations you have with clever people. It's a dynamic environment which creates a fertile ground.

"We have real world problems in mind, and it's exciting to bring together all the different skill sets across clinical, academia and research to help solve the problems." John said.

John's calling was also confirmed when the Head of Haematology at Cambridge, Tony Green, was visiting Australia in 2003.

"I went to hear him speak about work that Bertie Gottgens and he were doing in relation to DNA elements that control gene expression during blood development. It was like hearing a piece of music you'd never heard before... it was just my genre.

"I wrote to him after that and things went from there. My Menzies Fellowship certainly helped. It allowed me to be amongst people doing amazing things. In fact what I do now, investigating gene expression in blood cancers, was directly influenced by my time at Cambridge," John said.

"It was a very important time to be there - they were just starting to apply high throughput techniques to investigate gene regulation and draft maps of the human and other animal genomes were just emerging."

It was also a long way from the start of John's medical studies at the University of Colombo. Due to unrest in Sri Lanka, John applied to come to Australia and was able to transfer directly to UNSW Medicine. He has maintained his professional connection with his first Australian university right the way through his career.

A lecturer himself John is keenly aware of the pace of change and how technology impacts medical practice and research.

"When I'm lecturing or talking to students we often discuss the fact that you just can't imagine how the practice of medicine will be in 20 years, given the pace of change. It's incredible.

"But for all of the technology and advancements, in some ways we are still looking for transformational change in oncology.

"In Leukaemia, for example, with the exception of one sub-type, improvements in survival have mostly been driven by a better integrated network of bone marrow transplants and improvements in managing side effects of chemotherapy. But the chemotherapy agents that form the backbone of leukemia treatment hasn't changed much in over 50 years and survival rates haven't exactly plummeted.

"We're very cognisant of the fact that technology doesn't equal patient survival. There is still so much to do. "

John is working on a number of translational research projects where the discoveries have the potential to make a big difference.

Perhaps the most advanced of these projects is the development of predictive assays which may help prevent patients with myelodysplastic syndrome (MDS, which can progress to leukaemia) from futile treatment if it's unlikely to work.

John explains that of the hundreds of patients diagnosed with MDS each year in Australia, early treatment often misses the mark. "The first line treatment is a drug which only works in 50 per cent of patients, but you have to give the drug to the patient for six months before you know whether they will respond.

"Now we have developed an assay to predict who will respond, we could reduce the personal and economic burden of futile treatment. The challenge is to identify drug combinations for those patients unlikely to respond to first-line therapy.

"We are working with a pharmaceutical company on a clinical trial based on this work.

"It's rewarding when laboratory discoveries can be directly applied to patients," John said.

The next stage is human trials, but the process is slow and rightly so to prevent unintended side effects. Being able to see the potential and prove it are two different things.

"We have been concentrating on the safety side of things. We need to be confident before we inject cells into the human body. We have one other model to complete before we apply to Therapeutics Goods Australia (TGA) and the local human research ethics committee for approval of human trials.

"The key thing is to be confident that the stem cells that we introduce remain at the site of transplantation and develop into cell types to replace those that were damaged. At the end of this year we hope to be ready to go to the TGA.

"In research, you ride a wave. You could make a difference to the patient, you could save costs, but you need to manage the risks."