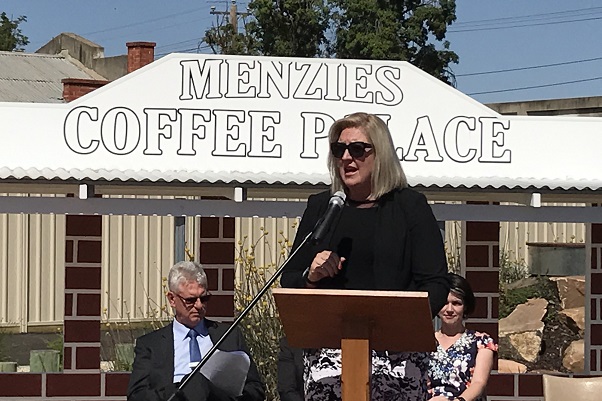 A tribute to the Menzies Family and the role they played in the small rural town of Jeparit - birthplace of Sir Robert Menzies - was the feature of the Menzies Square redevelopment, officially opened last week.

The Menzies Square redevelopment, funded by the Hindmarsh Shire, Victorian State Government and with additional funds from the Menzies Foundation and Federation University, brings alive the centre square of Jeparit, whilst marking some of the most notable achievements and moments in the life and career of its most famous export.

Speaking at the opening, Menzies Foundation CEO, Sarah Hardy said "We share two things in common with the town of Jeparit, and that is ... to keep the ambition and legacy of Sir Robert Menzies alive, for the communities who hold the history - obviously Jeparit being one of them - and to create relevance for those people today who visit this town."

The Menzies Foundation contributed $35,000 to early stages of the project.

"For us at the Foundation that's about extending the legacy of education and telling the story that reflects his own personal journey."

In congratulating the Hindmarsh Shire, Ms Hardy said "we are very proud of how you've captured the old and the new to support the legacy of Sir Robert."

Sir Robert's eldest grandson, Alec, said it was 50 years since he had visited Jeparit with his grandfather. "When you think about what it must have been like to come from Melbourne in the early days, you can only look back and admire the pioneers and the huge efforts they made." Alec's great grandfather James was a mayor in the region and opened the general store, which is depicted in the new Menzies Square redevelopment.

The story and photos in the Dimboola Courier have it all covered and they were put together by none other than Menzies Centenary Prize winner, Andrew King...helping his dad out with the news over summer while he takes a break from engineering study at Monash University.

The State Government of Victoria was the major funder of Menzies Square, with $165,000 granted from the Putting Locals First program managed by Regional Development Victoria.