Nick's dual career the way of the future | Menzies Foundation

Nick's dual career the way of the future 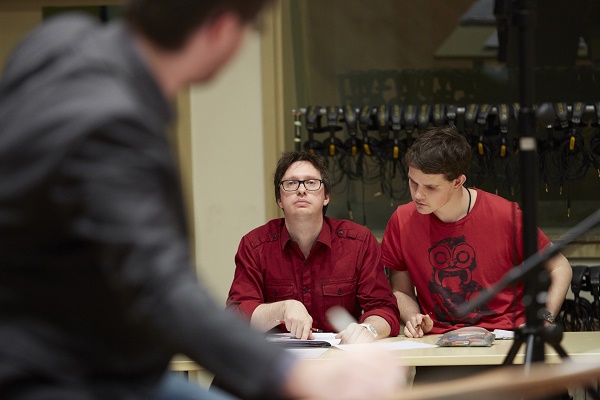 The students might be off for their summer break, but this just marks the start of 'work' of the creative kind for their teacher Nick Vines.

The accidental teacher is embracing the dual world of practical teaching and pursuing his esoteric musical creativity, which seems to have become his preferred mix.

Nick is the only Harvard Menzies scholar with a PhD in Music Composition and has been teaching for just over five years at Sydney Grammar School, where he is now the Senior Master Academic Extension (Music).

Outside of his teaching role, he also has a creative career. The Opera, 'Loose, Wet and Perforated', which he recorded this year in Boston, will come out commercially this year. A friend in Australia is also recording Nick's piano music of 12 movements for children at HSC level.

He is lucky his temperament means he has the energy to wear many hats and pursue different aspects of his careers.

To some extent the challenges with his own music give him very tangible, real world advice to pass on to his young charges at Sydney Grammar.

"The world is changing - it's becoming more conservative and less creative," Nick said.

"In Australia I think we have the notion that arts is something you do as a kid and then you grow out of it.

"I like to focus on the practical thing of how you create a life around your creative pursuits. How can I sustain an artistic practice and still survive in a material and bodily sense?

"Two generations ago it was very exciting; we had patronage models where you didn't have to justify your outcomes and outputs and that led to interesting results.

"I think its important kids understand the reality is different. We're almost back to a 19th century English model," he said.

"If you're lucky enough to have some kind of patronage or be independently wealthy, then you may be able to pursue an artistic career, but there is no longer institutional support for the arts.

"So you need a balance of the practical and the creative and if you don't have a balance you just stop," Nick said.

"Composition is kind of like engineering but with creative, emotional and psychological elements - it's very stimulating."

Teaching high school is not easy even in the most affluent of environments, but Nick sees that he is lucky where he is working with "nice kids who are interested in creative activity. Even the naughty kids can engage with music. They are capable and intellectually flexible enough to respond.

"The key is to be genuinely interested in their interests - I use pop culture and the things they are listening to and then when you analyse it and talk about it in an intellectual way, they are interested."

"There are few things that activate the brain in the same way. It integrates the intellectual, physical, visceral and psychological.... and it has applications far beyond music itself."

Coming to teaching with a non-teaching grounding behind him might be something that has taken a while for others to accept, but Nick thinks it is the way of the future. "In the future we won't have career teachers in the same way. People will have dual careers like I did; specialise first and then do a teaching degree.

"I am a teacher by nature; I think I just have the right temperament. It wasn't the intent (to pursue teaching), it's just where I ended up.

"It is interesting to think about how I got here because I didn't really have a great time at school."

What he did have at school was the support to indulge his musical interest.

"A choir director I had when I was 9 or 10 told me I said quite clearly I wanted to be a composer. While I don't really recall that, I did start writing music when I was in high school.

What he also had was a formative experience at Harvard, which was about much more than the music.

"Being at Harvard automatically gives you access. It was important in terms of my intellectual development, not just musically. The majority of what I learnt was about life generally and the way the world works.

"My most important experience at Harvard was as a tutor - I ended up being there for nine years.

"I discovered by nature that I am a teacher.

"I was the right person at the right time at Leverett House. I still see people from that time and stay in touch (he visits and has performances in Boston on a regular basis). I was very grateful for that opportunity to take on a tutoring role because it set up my whole time there. It meant I got food and board and you could survive without having to find external work. It allowed me time to think and develop and write music", Nick said.

Nick clearly did a bit more than be in the right place at the right time, becoming a music theory lecturer at Harvard for three years and then then held a visiting professorship at MIT for one year.

Whilst he supports the view that pursuing your passion is more important than making money, he knows he still has to pay the bills.

As well as singing and composing, Nick can play the French Horn and piano. The classically trained singer has never confined himself to one style and has performed everything from opera to pop.

And to some extent Nick is not really concerned about whether we have heard his music or know it, but is very pragmatic about its appeal and writing for different audiences.

"I'd say I probably have three styles; a very esoteric style which is played at quite niche US festivals, concert hall style which is challenging for the listener but not quite so out there and then almost a kitsch style which I write for kids and is more accessible and used for HSC exams.

"The challenge is to produce a style which is interesting, challenging and well done but communicates rather than panders. You won't get too far communicating your message if no-one listens. But there does have to be some truth in what you do. I will never be fully commercial.

"I work with and observe all styles of people.

"I'm open to styles and ideas whether I like them or not and I have an international outlook. I feel that you can't dismiss something if you don't know about it. You need to understand it before you reject it," Nick said.

To hear Nick talk about the importance of music to society is to instantly understand his passion and ability to communicate in a way which must influence his students.

"There are few things that activate the brain in the same way. It integrates the intellectual, physical, visceral and psychological.... and it has applications far beyond music itself.

"It makes you a more effective person in some way and it's so important to development.

"It's one of those things that is at the very beginning; from before you can speak.

"To remove it from education or to outsource it - to consume it, not perform it - diminishes the power it has."