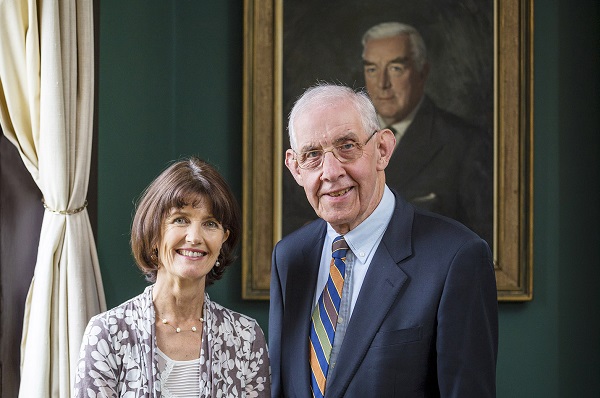 The nephew of Sir Robert Menzies, successful CEO, business coach and mentor, John Menzies, has joined the Menzies Foundation Board, taking the baton from Diana Menzies.

Having dedicated 10 years' service to the Board, Diana felt it was time to step down and allow for other family input.

Diana expressed gratitude toward the people who had the vision, determination and commitment necessary to establish the Menzies Foundation, nearly 40 years ago.

"My particular interest has always been the young men and women who have been awarded scholarships and the brilliant work they do.

When Diana appeared in a recent video about the scholars' leadership she said:

"What we look for is someone who has the capacity to inspire others and who has a strong vision for the future.

"Earning scholarships from an early age through his academic endeavours provided my grandfather with the opportunity to be the best he could be. He wanted that opportunity for all Australians, regardless of their circumstances."

In resigning her position, Diana thanked her fellow board members and said "It has been a privilege for me to represent the Menzies family during this time and to have met regularly with talented and highly respected individuals who have willingly committed themselves to honouring the memory of Sir Robert through the work of the Foundation.

"I am proud of all that has been achieved and will continue to follow the activities of the Foundation with great interest," Diana said.

He has a business skillset which is likely to prove advantageous as the Foundation works with entrepreneurs and also has a strong understanding of the Menzies ethos.

"My uncle regularly visited our family home knowing he would be in a relaxed environment. It provided me the opportunity, from an early age, to listen to conversations and gain an understanding of my uncle's principles and values. After my father died I was fortunate to continue to see my uncle on a regular basis.

"Another hero of mine was Sir William (Bill) Vines who was, I recall, the 'driving force' in establishing this Foundation. Bill was a very good friend of my father through a business involvement and again I was able to observe, at first hand, the characteristics of a very successful and great Australian.

"It has disappointed me that, as a nation, we have not capitalised on the great research work done to the extent we should and so I look forward to being involved in the new direction the Board is pursuing," John said.

John started his career as a chartered accountant before moving into the commercial world. He joined Howe & Co Pty Ltd in the leather industry and after leading a management buyout of the business oversaw the development of Howe Leather as it became a major supplier of upholstery leather to the world furniture and automotive leather markets. Howe Leather continues today as a profitable and major leather supplier to the international automotive industry.

More recently, John has had extensive experience as a business coach and mentor to entrepreneurial SME business owners.

The full list of Menzies Foundation Directors is here.