Take some risks to back entrepreneurial young Australians | Menzies Foundation

Take some risks to back entrepreneurial young Australians 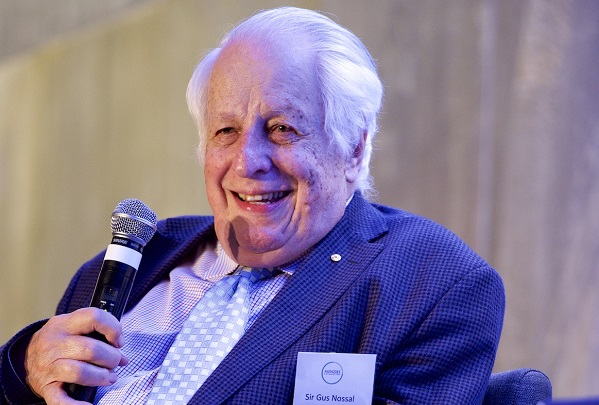 Back youth and take some risks was the advice of Sir Gustav Nossal AC, CBE, FRS when speaking recently about the Menzies Foundation’s new strategic approach to supporting entrepreneurs in science and technology.

Sir Gus put his impeccable science credentials on display while speaking at the Menzies Foundation’s 40th anniversary dinner in a fireside chat with Menzies Foundation Director and former Chair of the CSIRO, Dr John Stocker AO.

Internationally recognised and engaged for his expertise, having dedicated his life’s work to medical research and the benefits that flow from great scientific discoveries, Sir Gus had a lot of experience to call on when offering his advice on the key question of how the Foundation best directs its efforts.

Sir Gus said Australia needs to take some bold steps when trying to bridge the gap between its great research and commercialisation.

“The Foundation needs to find its niche - where it can make a difference and that is not by competing with government business or industry, but finding a way to work synergistically with them.

“We need to go for youth and take some risks, give young entrepreneurs a start and provide them with support.

“I can see from your book that you have a wonderful record of supporting young people. Put some money into the best of the youngsters and help them take the next step into the commercial world.

“Find and foment the spirit of rebellion which is there latent in just about every good academic. Find people who are willing to challenge the norms; entrepreneurial Aussies,” Sir Gus said.

He also commented that the failure to commercialise in Australia is sometimes overblown and potentially the Menzies Foundation can play a role in changing the rhetoric also.

“There is no magic formula but there are great international examples we can borrow from,” Sir Gus said.

“Lot of people will quite rightly point to Israel but I’d also mention Ireland which makes it easy to grow business by providing distinct tax advantages to high tech companies who want to exploit discoveries.

“Take a lead from Germany and reduce the sharp barrier that exists in Australia between academia and industry.”

Earlier in the night, the Chair of the Menzies Foundation, Peter Jopling AM QC, had earlier announced the Foundation would be working to reimagine and reawaken Menzies’ vision for a strong, knowledgeable Australia.

As part of that approach, the Menzies Foundation is committed to raising the profile and importance of support for Australian entrepreneurial science and technology start-ups.

“Over the next decade we will support a number of science entrepreneurs by establishing an incubator network and building a resource pipeline to support these start-ups to go to market and then to scale.

“In doing this we will build a greater understanding of what helps and hinders Australian science and technology start-ups. We will work with the science, business and government sectors to share knowledge about the opportunities, barriers and impediments in this space to help others,” Mr Jopling said.