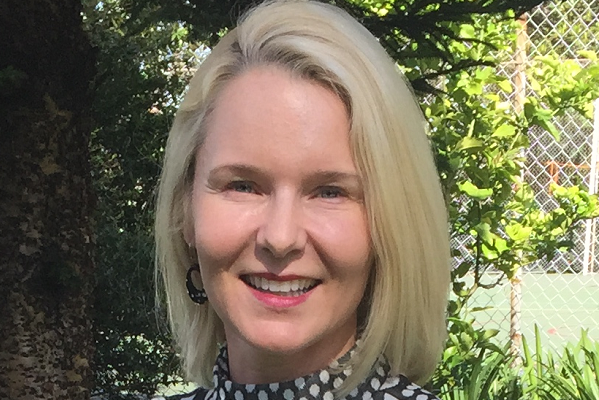 She could well be the prototype for the successful modern teacher.

Dr Carina Dennis has taken her evidence and research capabilities honed as a medical scientist, combined them with her communication skills as a journalist and editor, and is now using them to full effect in her third career as a teacher.

Geneticist and 1993 NHMRC Menzies Fellow, Carina counts as her absolute career highlight, coordinating the publication of the human genome sequence.

But teaching has exceeded all her expectations.

"I must admit to being a bit intimidated by the prospect of working with adolescents, as well as leaving a field where I had established respect and a name. How would I fit in? Would I like it? Could I do it?"

"One of the exciting aspects is how I've been able to transfer my skills from science and journalism into teaching in ways that I didn't expect. The transition was better than I expected."

When she decided to make her career leap into teaching, Carina spoke about her move with the ABC's Science Show on Radio National.

If her name is familiar to you, chances are you will have heard Carina's name on ABC radio or TV, where she was also a researcher for Catalyst.

Carina is now the Head Teacher of Teaching and Learning at Sydney Girls High School; a selective school in Surry Hills and the oldest girls state school in New South Wales. She started at the school as a science teacher in 2012.

Her leadership role allows her to work with students on projects across curriculum areas and with staff, helping set up programs to assist them meet their professional development goals to improve student outcomes. Being able to stay in a science teaching role is also a big bonus for Carina.

"There is a significant push for new innovative teaching practices. I enjoy working with my colleagues and using research on best practice to apply it locally or inform our practice."

"I can't imagine a more exciting time in education than right now. Coming from a research background, I love the emphasis on evidence," Carina said.

"As a leader it's your job to persuade people of the value of change and work to bring people along. However, when you try to initiate change, the biggest issue can be time.

"So many incredible ideas come from classroom teachers who don't have the time to develop or implement their ideas, or to evaluate them properly, because they are dealing with the day-to-day pressures in a changing environment."

"The challenge is taking ideas from theory to practice. We need classroom-based research. What works with one group of learners doesn't always work with another, even if the students may seem very similar. "

"For a long time educators haven't always felt comfortable analysing evidence, but now there is a growing appreciation for the need for effective and critical evaluation."

"That's a shift in culture; not just believing that something 'feels right' but being objective, and investigating how best to test ideas and asking what does the evidence say?"

As a lover of evidence and research, Carina isn't satisfied that she's got it all figured out.

In fact outside of her busy teaching and leadership roles she studies, conducts research, publishes and presents at conferences, whilst undertaking a Masters of Gifted Education at UNSW. You could be forgiven for thinking Carina never sleeps.

"I continue to study and I've never stopped thinking it was worth it - research always inspires new ideas."

It was the search for new ideas which originally took Carina to Oxford University under the auspices of her NHMRC Menzies Fellowship, to focus on the molecular genetics of Duchenne Muscular Dystrophy and improving the gene therapies used for treatment.

"I remember vividly my interview and being awarded the Fellowship," Carina said.

"The fact that other people believed in my work enough to support me so I could develop my skills overseas was just such a vote of confidence. I had a willingness to try new things because the Menzies Foundation backed me, and that gave me courage."

"It also opened connections with an alumni and other people who had gone before me. Soon after arriving in England, I was introduced to previous Fellows like (Professor) Robyn O'Hehir. I looked up to her, and I still do, and it was wonderful to make those connections with role models."

"Through the Fellowship and beyond there are first, second and third connections - it opened up such a big network and even now it continues to be invaluable," she said.

"Medical research is a long-term objective that takes dedication and commitment, as well as an understanding by funders that it really can take a long time to make a difference clinically. That's why financial backing of the Menzies Foundation and others is important."

"We need funding for basic science and overseas opportunities to support early career scientists. The Fellowship provided young researchers with important funds at a critical point in their career."

After completing her DPhil at Oxford, Carina went on to become a senior editor of the journal, Nature and it was here she secured the exclusive release and publication of the research on the Human Genome Sequence.

"The Human Genome Project started around the same time as I was doing my undergraduate degree in genetics, so it was just incredible to be involved in its publication. If I can use an analogy this was like growing up wanting to be an astronaut and then being part of the mission to go to Mars for the first time. "

"There are ongoing career highs but it is difficult to compare. Right now it's just different kinds of excitement."

Having an impact on young people

"You become more acutely aware of the impact you can have on young people - regardless of the role you play in their lives (teacher, counsellor, mentor) - sometimes I hear something from a past student or a parent and I am blown away by the impact you can have; you don't even know it at the time, but it does shape them. It is a real privilege to be part of their learning."

With Australian educators looking for the answer on how to better encourage girls and women to pursue careers in STEM, Carina is uniquely placed to give her opinion on what might work.

"Role modelling is so important. Young girls and women need to be able to see themselves in that role and for people in those roles to be more recognisable in mainstream society."

"There are some incredible female role models out there now; people like Michelle Symmons (Australian Research Council Laureate Fellow and Scientia Professor of Quantum Physics in the Faculty of Science at the University of New South Wales).

"I think we need clear communication about the job opportunities available to people who study STEM subjects, the possible career pathways they could take, and then advice on how to achieve their career goals."

It is not just the future of teaching and science that occupies Carina's time.

With several careers already under her belt Carina says parenting has been her most joyful and most challenging role.

She has two children aged 10 and 12. "My son just started high school this year and, as you watch them develop as young people, you learn every day as a parent."

Carina is also engaged to be married and has two other passions which keep some balance in her busy life. She loves the theatre and bushwalking.

"I go bushwalking whenever I can. I was overseas for nearly a decade and I missed the Australian bush so much. I love to get away from it all; it's very grounding, the smell of eucalypts, the sound of birds, it helps me reset."

We can't wait to see what's next for Dr Carina Dennis.