Liz Killen believes that Australian science is world-leading, and the more people that know about it, the better.

A passionate communicator, she recently jumped at the opportunity get some of Imperial College’s researchers sharing their work at the secret bar under the Australian High Commission as a part of the ‘Pint of Science’ festival – an international festival in over 175 cities and 12 countries which celebrates bringing science to the masses.

Liz was awarded the 2016 Engineering Scholarship and is undertaking a Master of Science Communication at Imperial College London. Here’s what she has to report on the event.

It’s not every day here in London I find myself surrounded by Australians, with a Coopers in hand, eating party pies. It’s even more unusual that I’m doing this while listening to scientists talk about their research from a patch of astro-turf lawn.

This May, researchers from Imperial College London have taken to the pub to share their science over a schooner, answering the big questions. How can we make people live longer? How can technology reverse blindness? And, perhaps most importantly, where is the zombie apocalypse going to start?

But I’m not in just any old bar. As part of the Pint of Science festival, The Australian High Commission in London has opened its doors for the first ever public event in their secret underground pub. 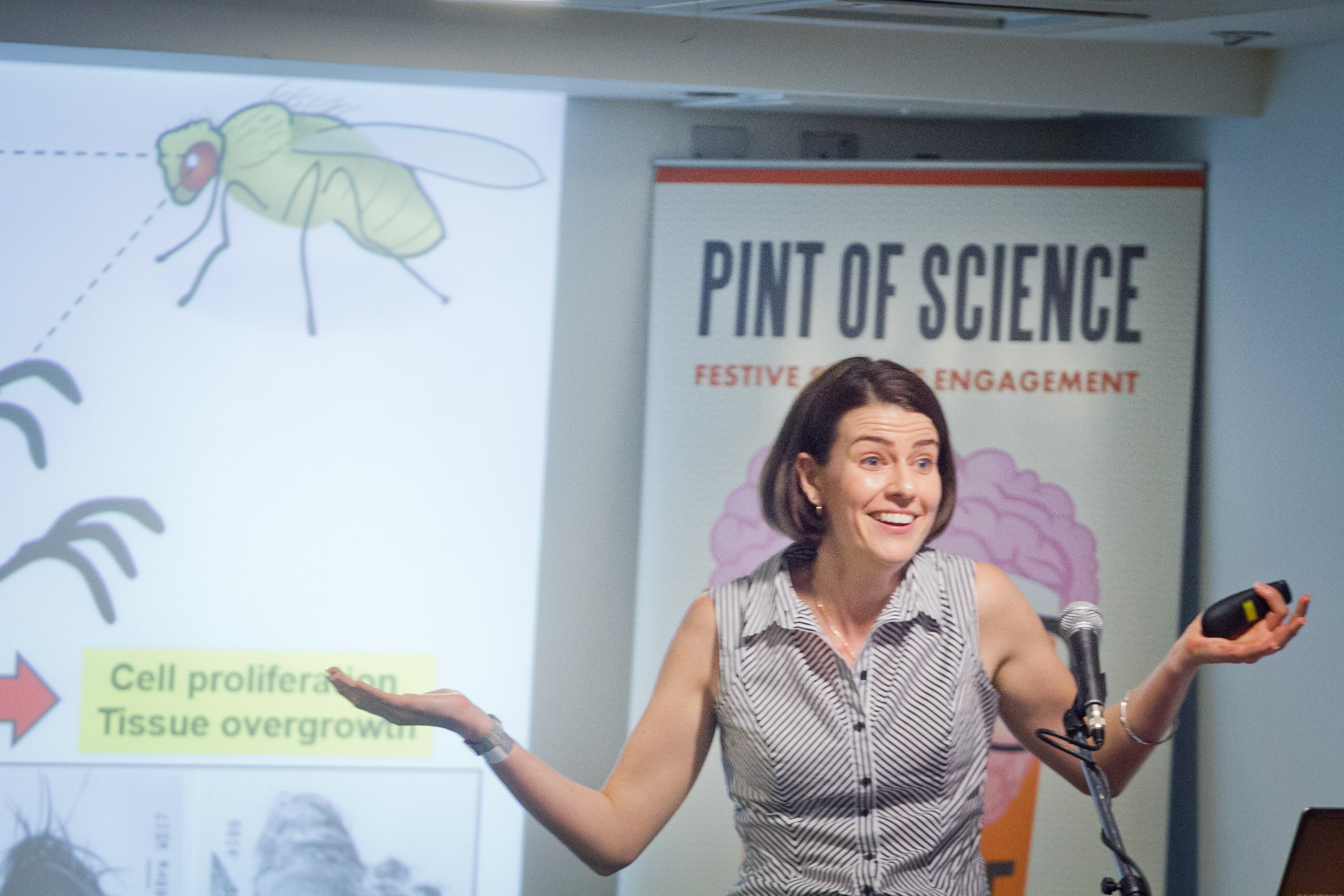 Those who have had a chance to visit agree that Australia House is an impressive building. Located smack-bang in the middle of London, it’s full of Aussie marble, and the entrance hall is so impressive that it was used as the set for Gringotts in the Harry Potter movies. But my favourite part of Australia House is the bar, which feels like I’m back home and have just stepped into an RSL. Possibly in the early 1990’s.

How did I end up here? Through the Menzies Foundation. I was lucky enough to receive the 2016 Engineering scholarship, and was first put in touch with the Australian High Commission through the annual dinner hosted for Menzies scholars by the Britain-Australia society. When I mentioned my degree was in Science Communication – we found we shared a common belief – that Australian science is world-leading, and the more people that know about it, the better.

We weren’t alone. A team of volunteers including students from Imperial College assembled to help make our Aussie-themed Pint of Science night a success, and BBC journalist and fellow Australian Katie Silver brought her excellent MC skills and terrible jokes to the table. The enthusiasm of Australian High Commission staff were instrumental in bringing this about – a notable mention to Prue Loney. And, of course, our most important volunteers were the scientists.

Yes. Yes we do. Photo credit: The London Lens Project.

Dr Kris Murray warned us about where a zombie pandemic would come from (probably bats) and where it would start (probably China, India, or Europe). Professor Anne Dell showed us how cancer cells and foetus could both be using the same sugars to hide from our immune systems. We were relieved to hear from Dr Ruth Peters that the occasional pint or two might reduce our risk of dementia, compared to not drinking any alcohol at all. Dr Katharina Hauck introduced us to the impressive mathematics that is guiding policy spending to increase life expectancy in the developing world. Dr Rachael Barry introduced us to the undead cells inside our bodies, and Dr Rylie Green showed us why the future of the bionic eye needs biopolymers.

To showcase the amazing work of Aussie scientists, Pint of Science is a perfect platform. From humble beginnings five years ago in a pub in London, Pint of has grown an international festival in over 175 cities and 12 countries. Volunteer-run, the festival runs in May each year, and I’d strongly encourage scientists to get involved through their local university in 2018.